Clean vs. Green: what’s the difference?

Both clean and green energy have the same end goals of reducing global greenhouse gas emissions and combating climate change, but did you know they are not the same thing?

According to the Cambridge Dictionary, green energy is defined as “Energy that can be produced in a way that protects the natural environment, for example by using wind, water, or the sun.”

Green energy is derived from sources that can be naturally replenished and they don’t produce pollution in the process (unlike fossil fuels). This means that not all sources used by the clean and renewable energy industry are, in fact, green. For example, power generation that burns organic material from sustainable forests may be renewable, but it’s not necessarily green, due to the CO2 produced by the burning process itself. Green energy sources also avoid mining or drilling operations that can be damaging to fragile ecosystems. Green energy is considered the most environmentally-friendly resource available to us today, with little to no ongoing environmental impact.

All green energy is also “clean” energy by definition, but the reverse is not always true.

According to the Collins Dictionary, clean energy is “Energy, as electricity or nuclear power, that does not pollute the atmosphere when used, as opposed to coal and oil.”

Clean energy is created without emitting greenhouse gasses but has the potential to release minimal amounts of carbon dioxide and other chemical contaminants during production, possibly affecting the environment. Additionally, clean energy is not necessarily renewable. Clean energy possesses geographical limitations and offers sporadic production peaks depending on weather conditions (could highly benefit from a smart grid). When it comes to nuclear energy, safe storage and containment of radioactive waste is a largely-unsolved concern.

If energy is clean but not green, the generation of the energy does not produce greenhouse gasses or other pollutants. However, either the source is non-renewable and/or has negative effects on the environment during production. 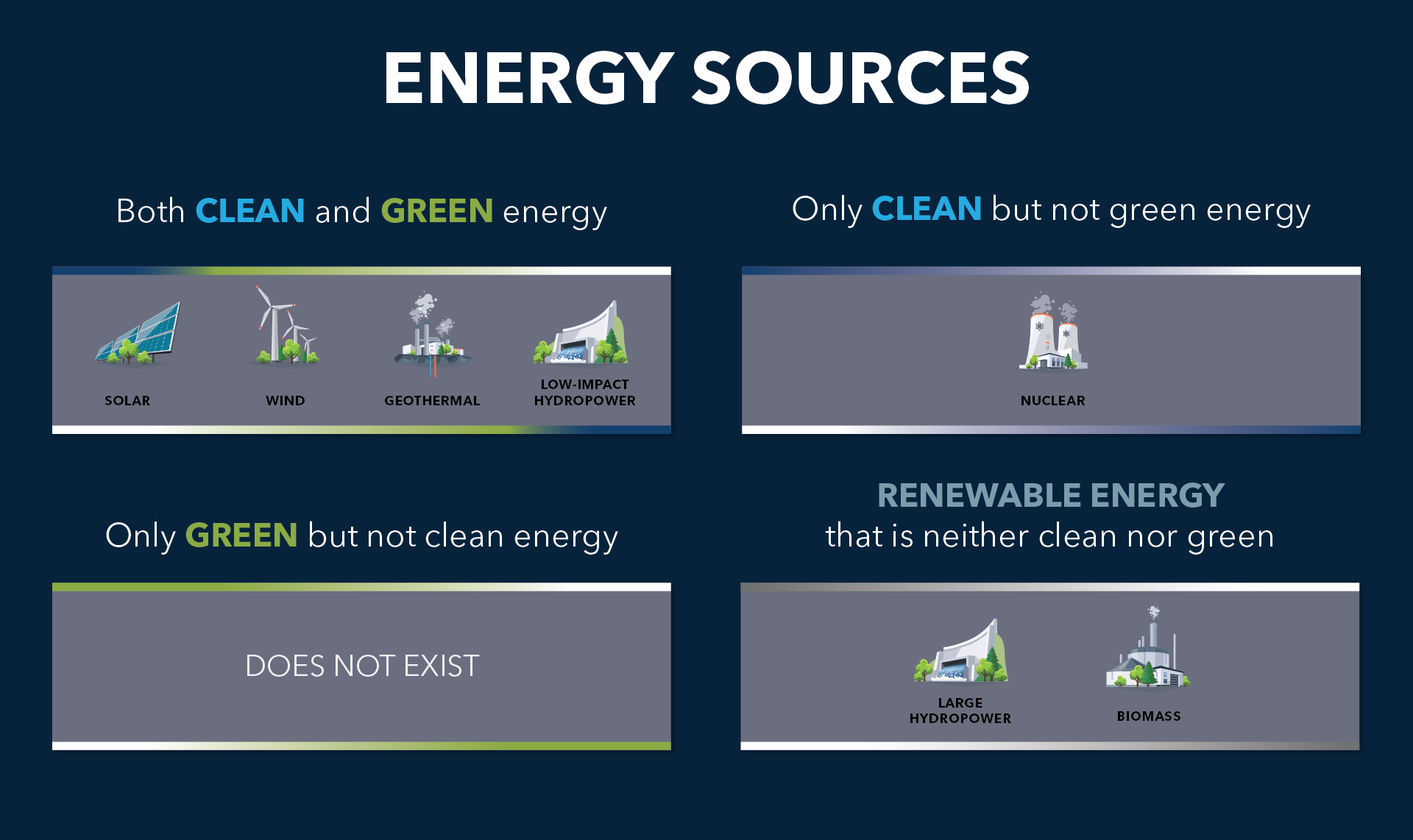 Solar, wind, geothermal, and low-impact hydropower are both green and clean energies because they are renewable; their generation does not produce greenhouse gas emissions nor does it harm the environment.

Clean and green energy are an integral part of helping us overcome our current climate crisis and that is why it is important to know the difference between the two, rather than simply using the terms interchangeably.

Pathways to a responsible and sustainable energy future.

The company’s principal executive office is located in Escondido, CA.
Dalrada Energy Services is a subsidiary of Dalrada Financial Corporation.
Copyright © 2023. Privacy-Policy | Website-Disclaimer | Accessibility
We use cookies on our website to give you the most relevant experience by remembering your preferences and repeat visits. By clicking “Accept All”, you consent to the use of ALL the cookies. However, you may visit "Cookie Settings" to provide a controlled consent.
Cookie SettingsAccept All
Manage consent

This website uses cookies to improve your experience while you navigate through the website. Out of these, the cookies that are categorized as necessary are stored on your browser as they are essential for the working of basic functionalities of the website. We also use third-party cookies that help us analyze and understand how you use this website. These cookies will be stored in your browser only with your consent. You also have the option to opt-out of these cookies. But opting out of some of these cookies may affect your browsing experience.
Necessary Always Enabled
Necessary cookies are absolutely essential for the website to function properly. These cookies ensure basic functionalities and security features of the website, anonymously.
Functional
Functional cookies help to perform certain functionalities like sharing the content of the website on social media platforms, collect feedbacks, and other third-party features.
Performance
Performance cookies are used to understand and analyze the key performance indexes of the website which helps in delivering a better user experience for the visitors.
Analytics
Analytical cookies are used to understand how visitors interact with the website. These cookies help provide information on metrics the number of visitors, bounce rate, traffic source, etc.
Advertisement
Advertisement cookies are used to provide visitors with relevant ads and marketing campaigns. These cookies track visitors across websites and collect information to provide customized ads.
Others
Other uncategorized cookies are those that are being analyzed and have not been classified into a category as yet.
SAVE & ACCEPT
Skip to content